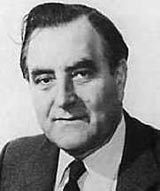 Doug Insole
England
Player profile Full name Douglas John Insole
Born April 18, 1926, Clapton, London
Major teams England, Cambridge University, Essex
Batting style Right-hand bat
Bowling style Right-arm medium
Fielding position Wicketkeeper
Doug Insole was probably better known for his influence on cricket after the end of his playing days rather than his exploits on the field. He was however, a fine batsman, who made over 50 first-class hundreds and had a modest Test career. His method was unorthodox, with an open stance, and a dominant bottom hand. This made him vulnerable to the ball moving away from him, but an excellent eye, combined with great concentration and tenacity, made him successful. He adapted his methods to the state of the game, but his natural inclination was to score at a fast rate.

An excellent slip fielder (he also occasionally kept wicket), Insole was also an outstanding leader. He honed his captaincy skills at Cambridge in 1949, and took over the leadership of Essex from T.N Pearce the following year. Essex finished bottom of the championship that summer, but over the next decade became a force in the championship, in no small part due to Insole's influence. He understood the game well, and was popular with his players. He bowled occasional medium pace, and was good enough to take 138 first-class wickets.

Insole's Test career consisted of nine matches spread over seven years. He debuted against West Indies in 1950, but twice was dismissed cheaply by Ramadhin as England were heavily defeated. Five years later he was given a second opportunity against South Africa, and played a single Test against Australia in 1956, without notable success. He was chosen to vice-captain the England tourists visiting South Africa in 1956, and topped the England Test batting averages. He made an important century in the third Test, and England won the series. He played for England just once more, making a duck in his final innings against South Africa in 1957. He continued to play for Essex until his retirement in 1963, having at that point made centuries against all the first-class counties, other than his own, with over 25,000 first-class runs.

Insole served cricket with considerable distinction after his playing career (earning the CBE). He was on the MCC committee for over 20 years, and an England selector for 19. Notably he was chair of the Test and County Cricket Board at the time of the Packer "crisis", and led English cricket through a difficult time with much common sense. He also managed the 1978-79 England tour of Australia, and latterly was chair of the European Cricket In 2006 he was elected as president of MCC. Council.

Wisden Cricketer of the Year 1956