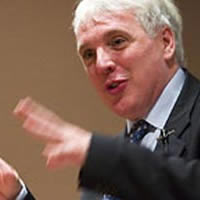 Former NATO spokesman Jamie Shea, attended Monoux from 1965 to 1972. On 22 July 1999, Jamie was interviewed by the Marketing Department of Sir George Monoux College, in which he said that he has some 'very fond memories of Monoux'. Jamie studied 7 O levels (including rural biology) and three A levels in French, German and English. Jamie particularly enjoyed the extra-curricular activities and said Mr Stirrup, the Head teacher, was very influential over his career choice. His message to the current Monoux students was that 'sixth form years are the most important time of your lives - you have the time, the teachers and the opportunities. Make the most of every single one'. For the citizens of Waltham Forest he said 'I spent many happy years living in Walthamstow. The Borough even gave me a grant to study in France for which I am extremely grateful. I am also grateful for the nice article in the local press and the fact that the home base still remembers me'. He added that he would love to come back to Monoux next time he is in London and come and have a look at how well the College is doing.

Jamie Shea was appointed Companion of the Order of St Michael and St George (CMG) in the 2020 New Year Honours for services to diplomacy and public service.