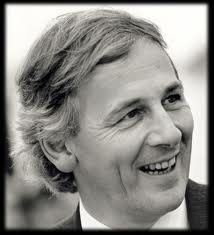 Internationally known as one the UK's leading choirtrainers, Barry Rose began his musical career in the most unusual circumstances - playing hymns on the harmonium in a local mission-church on Sundays, whilst working in a London insurance office during the week.

In 1958, at the age of 24, he decided to give up the world of commerce, and on the advice of the late Felix Aprahamian (music critic of The Sunday Times), he auditioned for a place at The Royal Academy of Music, to study organ with C.H.Trevor.

By then, Barry was organist and choirmaster of St. Andrew's Church, Kingsbury, a fine suburban church in North West London, where he had enlarged and improved the already flourishing boys choir, as well as bringing in musical friends to sing in the back-rows.

Apart from the experience gained in playing regularly for Sunday Worship, he says that that most influential period of his young musical life was the eighteen months  he had previously spent singing Bass in Martindale Sidwell's choir at Hampstead Parish Church, where, as he puts it "you learn to think like a singer, rather than an organist". In those days the Hampstead choir was regarded as the finest church choir in the land, and testimony to this is the list of many broadcasts, concerts and tours in which they took part.

Against all the odds, and without a single formal musical qualification to his name, in May 1960, Barry was appointed as the first Organist and Master of the Choristers of the new Guildford Cathedral. This controversial appointment would not have been made without the foresight and wisdom of the then Provost of Guildford, The Very Reverend Walter Boulton, who was to be shamefully passed over, when the appointment of the first Dean of the new Cathedral was made.

Once in Guildford, Barry set about creating a musical foundation which would bring daily sung Services to the new Cathedral. Over the first year or so there was the inevitable hesitant start by the boys, but they were encouraged and supported by a most expert and musical group of Lay Clerks, many of whom were accomplished soloists in their own right. The Guildford choir soon established itself in the forefront of choral music of the time, achieving widespread recognition through its several best-selling recordings for EMI, both on the HMV label, and on the newly founded Music for Pleasure label for the LP Christmas Carols from Guildford Cathedral, 1966. These recordings have sold in the hundreds of thousands, some still remaining in the current catalogues, and a measure of their success is the 1 Platinum, 1 Gold, and 2 Silver Discs so far awarded to the choir.

Now, 50 years on after his appointment, Barry Rose can look back on three successful periods with three Cathedral choirs - Guildford (1960-74), St. Paul's (1974-84) and St. Albans (1988-97), as well as twenty years at the BBC, as George Thalben Ball's successor as Music Adviser to the Head of Religious Broadcasting.