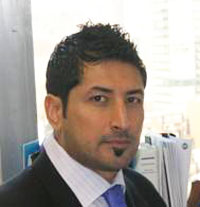 Captain Naeem Ahmed attended Monoux from 1984 when it was a Senior High School and left in 1988 when it was a Sixth Form College. During his time at the school he represented the school football team, captained both the cricket and rugby 1st teams, and represented Waltham Forest District in both sports and Essex County in cricket. After Monoux, Naeem, completed a BSc(Hons) and MSc in Information Technology before graduating from the Royal Military Academy Sandhurst where he was awarded Academy Colours for boxing and cricket. He was commissioned as an Army Infantry officer where he served for seven and a half years during which time he was deployed on four overseas operational tours of duty to Kosovo, Sierra Leone, Northern Ireland and Georgia with the United Nations as a UN Military Observer.