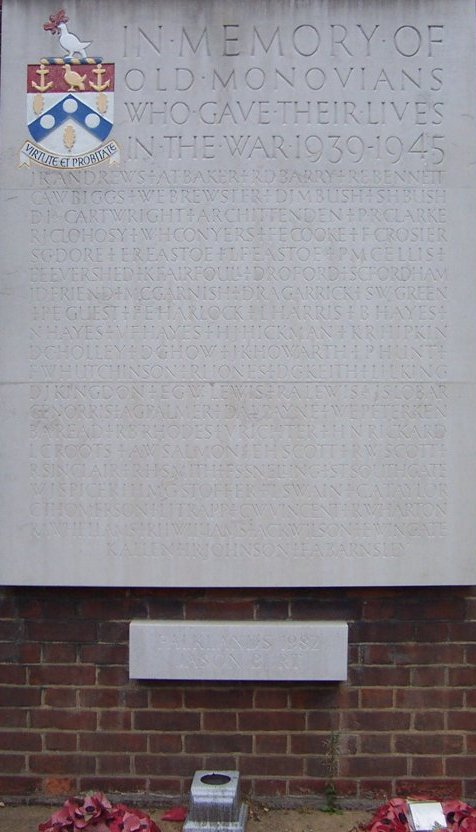 A very reverend and very impressive service took place at the School in the afternoon of Saturday, the 13th of November. This was the unveiling and dedication of the War Memorial Tablet in the garden of Remembrance in the north quadrangle in grateful memory of the seventy-six Old Boys who gave their lives in the war.

The afternoon was grey and still with patches of late autumn sunshine and the School Hall, where the service of remembrance was held, was filled parents with and relatives of those who had fallen, members of the staff, old boys, and friends of the School. The service, which had been arranged almost in its entirety by Dr. P.B.Whitt, the Second Master, was conducted by the Rev. J.C.Ellis formely Second Master of the staff and now vicar of Northfield, Birmingham. With him were Alderman Chaplin, chairman of the School Governors, the Headmaster, Mr. Stirrup, two Old Boys, candidates for the ministry, F.C.Carpenter and A.F.Auckland, and amongst those present were the Mayor and Mayoress of Walthamstow (Councillor Miss D. Wrigley and Mrs. M. Crosier), School Governors and local officials. The School choir occupied the rear of the platform and led the singing, and Mr. Belchambers played the introductory music and accompanied the service.

After sentences from the Scriptures, Psalm 23 (Brother James Air) and Collects, the hymn, The Supreme Sacrifice, was sung. This was followed by readings by Carpenter and Auckland from "Ecclesiasticus" and "Revelation" and then the Rev. J.C.Ellis gave an impressive and touching address. He claims to be representative of the four elements associated with the afternoon's ceremony in that he was a parent of one of the seventy six boys who had died in the war, had known nearly every one of them, had been a member of the teaching staff for nearly twenty years, and was a priest of the church and a veteran of the First World War. The present state of the world depressed and distressed. On two occasions in the life-time of those who were his age, there had been no alternative but to choose the evil of war, the lesser of the two evils, whether to fight regardless of the cost, or to stand aside and make way for the rule of wrong over right. On looking back on our choice our consciences were clear. We were troubled because events were threatening to shape themselves into a colossal hammer, which might shatter every hope and dream the young men had died for. We asked ourselves: "Is human nature never going to improve?" We were struck by this jarring note in human progress and were searching for a way of life to see that the awful price of victory was used and not wasted. When we dreamed of a better world what were we to put our faith in? Could we put it in the pursuit of material comforts, in schemes of social amelioration, in child welfare and free education, in housing campaigns and increased wages? Our only hope for a better world, concluded Mr. Ellis, lay in the reawakening of the knowledge that we cannot do without God. We needed a reawakening of the worshipping heart of man. This meant a change of heart in each individual, and without this change of heart it meant that our boys had died in vain. This was the grim and inescapable challenge they had left behind. There was no other way, no other hope. "Apart from Me ye can do nothing." That was the message he heard from those Monoux boys. After the address the hymn, Jesus lives! thy terrors now, was sung and then followed the Lord's Prayer and the Benediction.

Those taking part in the unveiling ceremony together with the relatives then filed out into the quadrangle and took up positions facing the memorial Tablet. The ceremony was relayed by loud-speaker to those remaining in the hall. The Last Post was sounded by cadets of the Walthamstow squadron of the A.T.C. An Old Monovian, N.A.C.Bignell, who served in the war, then unveiled the Memorial Tablet, which was dedicated by Mr. Ellis. There followed two minutes' silence, the Reveille, and a prayer, and then the Garden of Remembrance was handed over to the Captain of the School by Flt.-Lieut.  .A.C.Jermott, D.F.C., D.F.M., another Old Monovian. The School Captain, on accepting, recited Laurence Binyon's beautiful and well known lines beginning "They shall grow not old as we that are left grow old," then followed the National Anthem and the simple yet unforgettable ceremony was at an end. Relatives and friends placed wreaths and bunches of flowers at foot of the Tablet, and later in the School library old acquaintances were renewed and old memories evoked as masters, parents, and old boys met for awhile before dispersing.