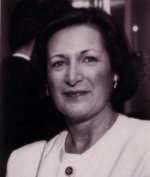 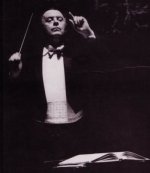 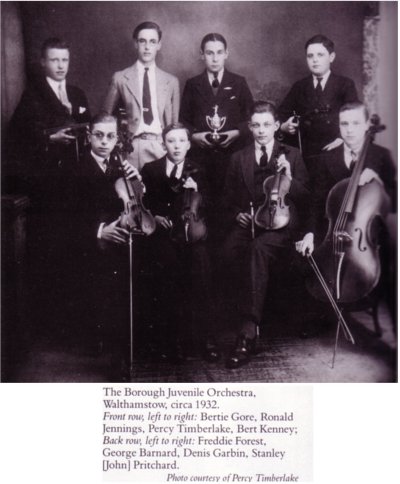 DIARY ENTRY: 4.OOam. Our second son born, to be named Stanley Frederick [John]. Eddie was mystified as to Amy's illness.

In 1928, ten-year-old Stanley sat for a junior County Scholarship for the Sir George Monoux Grammar School whose magnificent new building had been opened by the Lord Mayor of London in the previous year. It was a considerable achievement when he was accepted at the latter and followed Percy Timberlake who had gained a scholarship there a year earlier.
Stanley's arrival at the Monoux school in 1929 was the beginning of the second phase in his development. He joined the orchestra immediately, playing with them on Prize Day. Very much a member of what is termed the 'old school', the music master, Mr L C Belchambers, encouraged him. Having studied with Markham Lee at Trinity College, the master was fanatical about Mozart and Stanley received his introduction to the composer's work through him. The boys would joke that 'Old Man Belchambers had built his stool up to a height and it was all Mozart that he sat upon.'

Romantically, John recalled:
I think that almost my first vivid sense of pure Mozartian magic came when as a schoolboy I suddenly heard, during a French lesson, the clarinet theme of the trio of the 39th Symphony, wafted through open windows from a hall of the school, where a small visiting orchestra was playing to senior boys. The serene tune with its undulating accompaniment was, in a certain odd way, all the more wonderful for being heard on a summer day and at a distance, so that to my sorrow I have never recaptured the exact vibrations of that moment:_ but I feel that the sort of enchantment it produced is not inherently different from our maturer reactions to the marvels of Idomeneo. The difference is of degree and not of kind.
Curiously, the next steps in my Mozartian education were not through the symphonies and operas but by way of the piano works and string quartets - an approach which made infinitely clear a cardinal point, that an appearance of technical simplicity on paper cloaked difficulties which only a relentless aiming at perfection would solve. Thus I stumbled my way quite early towards the important principle that anything by Mozart is difficult to rehearse - a judgement I have never later seen reason to doubt, either in opera house or concert hall!
The following March there was a panic when Stanley cut the first finger of his right hand and was rushed to the Connaught Hospital by a master in his car. It was two months before he was able to practise after a confrontation with his father.

As an alternative to the hated violin, Stanley compromised, adopting the viola, his father's second instrument. In order to keep his son working with a string instrument, Albert would invite Timberlake and Bert Kenney (cello) to join their ensemble at home when Stanley would always play the viola.
At his first class with the vicar for confirmation (January 1931), he took the prize at the Scripture Union, his father proudly noting that Stanley had made his first public speech. Continuing his studies with Dorothy Parks, Stanley was playing the piano at socials and concert parties which she organised at St Stephen's Church and at the Misses Geary's churches, pieces such as the 1st Movement to Schubert's Sonata in D and the Shepherd's Dance by German. A week after his disagreement with his father about playing the violin, he won the piano solo contest at the Leyton Eisteddford, taking the bronze medal for his playing in the other sections, adjudicated by Alec Rowley and in the following year in the same competition with the same adjudicator - Arthur Rowley.

The players felt that they would like to continue working with John giving concerts on a regular basis in the Art Gallery. They even holidayed together and with Leslie Smart went to Crag House, Grasmere in the Lake District, where one evening John accompanied Vera Kantrovitch, Olga Hegedus and Eva Metzler in a concert. Olga Hegedus commented that even at that time John showed a natural authority and was able to get the best from an orchestra with minimum effort.
When Adila Fachiri, the vivacious Hungarian violinist, a great-niece of Joachim, appeared at Derby on 17th February 1945 for the Education Committee in the Art Gallery, Leslie Smart suggested John as her accompanist. Impressed by his accompaniment of Bloch's Baal Shem, having only seen the difficult score for the first time just before the concert, she asked him to accompany in a recital at the Wigmore Hall on 2nd May. His first appearance at the London venue was an exciting moment for John. 'The reaction to his ability as an accompanist by a soloist of international calibre was to be instrumental in his decision to become a professional musician.
The Derby Philharmonic often worked with the Derby Choral Union. At his first rehearsal with the choir, he told them to 'relax the voice, pay no attention to expression marks, aim at good tone and accuracy of notes' but at the second rehearsal, when they tackled the well-known opening chorus from Mendelssohn's Elijah, he took off his jacket, would not allow the singers to sit and worked paticularly on their expression. Favourably received, he commented: "The public public is entitled to hear its favourites and to good performances." Unfortunately the venue for the concerts, the LMS Institute, was unsatisfactory for such large works and for accomodating an audience.


The Decision to turn Professional

Peace and the Prudential decision to return to its headquarters in Holborn forced John to make a decision. With work as an accompanist, the increasing viability of the Derby String Orchestra, the Derby Philharmonic and now the Derby Choral Union, John realised that he should remain in Derby. He was fortunate that events had combined to take him away from the pressure of his parental background. Informing his mother on 8th July 1945 of his decision to become a professional musician, afraid that his father would not want him to leave a secure job, he wrote on the envelope in pencil, 'To be opened in secret'.
25 Bedford Street, Derby
My dear Mum
I think it would be wrong of me to let any more time go by without telling you of an intention which (perhaps you have guessed) has been in my mind for several months. To come quickly to the point. I think the time will arrive in two or three months for me to give up my work with the Prudential. Needless to say, I haven't reached such a decision without the most terrific thought, and a very deliberate weighing of ways and means.
Briefly, the position is this. As you know, I have been very lucky here in Derby to have such easy working conditions, under a sympathetic chief who has allowed me as much time off as I need for my musical activities. Well, now the time is fast approaching for the Pru. Divisional Centres to return to London and believe me, not only for myself but for all evacuees there is going to be a very difficult time in getting readjusted to the discipline and essential regimentation of Holborn Bars. If I go back to London (where, remember, I have no home to go to) I shall find it absolutely necessary to reduce very much, that which is the breath of life to me, my music. Moreover, I should find myself in the vast London arena, with no conducting appointments and lots of competition I expect for those which do arise.
By comparison, in Derby I have, I really think (without sounding conceited), created a very special position for myself which is quite unchallenged. The new Choral Union appointment carries with it excellent fees, the Derby Philharmonic has guaranteed me fifteen guineas a concert when I become a professional musician and so has the Derby String Orchestra. In addition my work as accompanist for the Municipal Concerts will be re-rated at probably five guineas a concert: it has been quite touching while I have been enquiring into the possibilities, to find how many eager friends are anxious to help me, keen as some of them put it, to help me get to a place 'right at the top of the profession.'

What I have in mind to do is this:

1. Spend a good part of my time in Derby to work with:
a) the Derby Choral Union
b) the Derby String Orchestra
c) the Derby Philharmonic
also a 'cracking' Orchestra for the Derbyshire Education Committee, also the Municipal Concerts, also all the 'odd' engagements which normally come my way as accompanist etc. during the season in Derby.