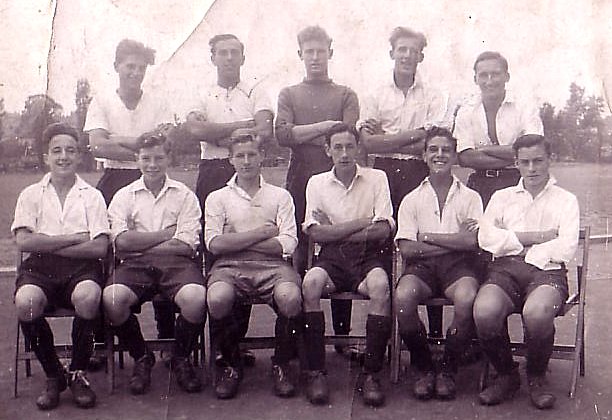 The past season has been a sueeesful one for the youngest First Eleven that has represented the School for some years. A regular eleven was built up, this probably being the main reason for the team's success. However, against university and training college sides the team found its lack of weight and height to be a considerable disadvantage. It was not until the end of the spring Term that an excellent record was somewhat spoilt because of a considerable loss of form perhaps occasioned by the harder, drier grounds. S. Black was the leading goal-scorer, and when he left at Christmas no other Player emerged to continue his role. The only position not satisfactorily filled was at centre forward and several experiments here met with little success. In the House Cup Competition N. Harris proved himself to he a very good centre- forward and a goalkeeper of distinction.
Besides meeting a very strong Old Monovians' team, it was good to renew acquaintance with other Old Boys in visiting sides. D.J. Insole added much strength to the Staff team: B. A. Williams was in the Shoreditch Training College Xl; and P. Browne played for a side from the London Institute of Education.
For the attractive fixture-list thanks are due to E. B. Fairman who acted as secretary throughout the season. Messrs. Breese and Peacock refereed most of our home games, the former on Wednesdays and the latter on Saturdays. Mention must be made of P. Hurst of VI Lit. who was always waiting to referee 2nd XI home games. Once again Mr. Philpott took his usual excellent care of the pitches and equipment.

Team Criticisms
Harris, N. (Goalkeeper). Although he only began playing in goal this season I do not think we played against a goalkeeper as good. His handling of the ball, especially iii the air, was remarkably safe. At first he was somewhat, uncertain as to when to leave his goal, but as his confidence increased he developed a fine understanding with the rest of the defence. His chief fault was that he was slow to clear the ball. His kicking was consistently good. As centre forward he showed more than average promise.
BEALE, R. (Right Back). His play improved immensely as the season progressed. His kicking with both feet (except his volleying when he was apt to mis-time the ball) was excellent. He must curb an instinct for moving too far up the field and should not overdo the sliding-taekle which, if mis-timed, leaves the opposing winger an open path to goal. He would do better to exclude from his play petty fouling and unnecessary handling of the ball.
NORFOLK. D. F. (Left Back). Even though he did not maintain his form of the previous season, his value to the team cannot he over-rated. He has a strong kick with both feet. He rarely wasted the ball but attempted to set in motion an attacking movement with either a short pass to his wing-half or a long clearance to the centre or wing. His tackling and ability to use his head (in both senses) contributed to his success.
Mason, J.L. (Centre Half). A tower of strength in defence, he was able to dominate the centre of the field with his powerful heading and strong clearances. At first he was reluctant to use his left foot, but is in the process of remedying this fault. His slowness was hardly noticeable, as he was rarely beaten in a tackle. He has a habit of following the play, instead of sticking closely to the opposing centre forward, which is the task of a centre-half in the successful application of the third-back system of defence.
PEACOCK, S. (Left Half). Coming straight into the team from the Under Fourteen Eleven Peacock settled down immediately. Essentially an attacking wing-half he distributed the ball well and combined effectively with his inside-forward, especially with Fairman in the latter half of the season. Because of this attacking policy, he allowed the opposing inside right rather too much scope. His tackling was keen and effective, and his heading far above the average. He could also throw a ball well.
TURNER, T. (Outside Right). Once established in the team he maintained his place, but I do not think we saw the best of Turner this season. He lacked confidence in himself, He has the essential qualities of a winger: he is tricky, speedy and has an accurate centre with either foot. He must improve his corner kicking, and when in possession of the ball should cut into the centre more often. He should do well next season.
Black, S. (Inside Right). This tall, strongly built player with a fair turn of speed proved a remarkable success as an inside forward. He always worked very hard, and to score 22 goals before Christmas was indeed a fine achievement. He relied almost solely upon his speed and weight which, combined with a powerful shot in both feet, proved most effective. He distributed the ball well and usually chose the most direct approach to goal. His heading, although adequate, could be improved to advantage especially in front of goal.
FAIRMAN, K, B. (Inside Left). Au injury to his right knee early in the season had the effect of making Fairman use his left foot more, both in dribbling and shooting. He rarely seemed to tire and worked extremely hard in attack and defence. With his football sense he engineered many movements. Possessing many tricks and good ball control, he could considerably improve his play if he would not persist in holding the ball so long, thereby slowing up the rest the forward line and giving the opposing defence time in which to recover.
BLACK, B. (Inside Forward). A natural two-footed footballer, this young player is able to play with ease in either inside-forward position. At first he was lazy but as he became accustomed to senior football, Black exerted himself as a successful inside forward must do. With an excellent body swerve he was able to deceive opponents at will and his distribution of the ball was good. However, he must learn to take full advantage of a gap in the opposing defence, and attempt to improve the accuracy of his powerful shooting.
HARPIN, W. S. (Outside Left). A lightly built player who always tried very hard. His persistence was rewarded by some very good goals from almost impossible angles. He was direct in his approach to goal but his finishing was often spoilt by inability to use his right foot. He would do better to centre the ball more often instead of shooting. His placing of corner-kicks was good.
K.C.T.

TAMPLIN, K. C. (Captain). As Captain of the Eleven he has achieved the honour we expected and has successfully completed three seasons in the School side. Tamplin could always be relied on to play a steady game, which has done much to give a particularly young side confidence, even against the strongest opposition. Grand ball control and easy running dribbles enabled him to play an effective attacking wing-half position. Tamplin got the best out of his team and has helped towards building a strong side or next season.