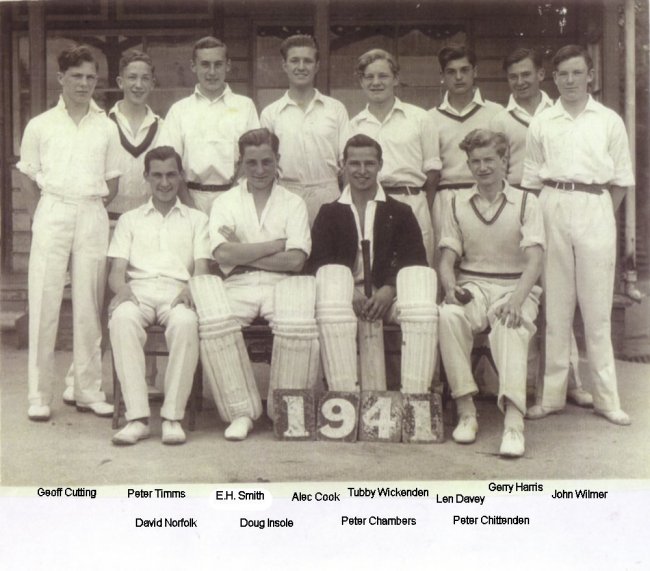 Chambers, P.-An excellent fast bowler who kept an exact length and swung the new ball both ways. He was a very useful batsman, especially strong on the leg-side, a safe fielder, and a Captain who set a good example to his side.
Chittenden, A.R. - An opening batsman who always looked as if set for a big score, which, however, he seldom obtained. His main fault was trying to hook a ball on the leg stump before his eye was in; consequently he was nearly always l.b.w. or bowled leg stump. A useful slow off-break bowler, whose fielding left much to be desired.
Cook, A. - A very good attacking batsman, who seldom failed. He scored runs freely all round the wicket and had a very powerful hook. He was a very accurate fast-medium bowler, although sometimes rattled. His fielding was very good and always keen.
Insole, D. -A superb batsman with a great variety of strokes, who was the main scorer of the team. As a wicket-keeper he proved himself very valuable and succeeded in bringing off some very difficult catches behind the stumps. He was, too, a brilliant fielder.
Cutting, G. - Opened the bowling with Chambers and met with no little success. Although he relied mainly on out-swingers, he could turn the ball sharply from leg while retaining his fast medium pace. Although he was number 10 in the batting order, his batting was not to be ignored, and on one occasion he pulled the side out of a rut.
Smith, E. H. - An opening batsman who showed himself very capable. Although rather slow in starting, he usually managed to knock a good score. His leg glance was particularly good. He was a keen, sound slip-fielder.
TimmS, P. A. - A left-handed batsman, who often proved a thorn in his opponent's side by his stubborn if not brilliant batting. His fielding at point was excellent, and he took several good catches.
Willmer, J. - An aggressive batsman who did not get much chance to show his capabilities. He usually batted soundly, however, and was at his best at critical times. He was a very sound fielder.
Norfolk, D. - An attacking batsman whose nerves did not serve him well. He showed promise, however, and had several good strokes. He was a keen fielder.
Davey, F. - A fast-medium bowler who showed great promise. He should resist the temptation to bowl too fast before obtaining a length and should not allow himself to get rattled. A fair fielder, and a batsman who had the peculiar habit of letting leg balls go by and playing forward to everything else.