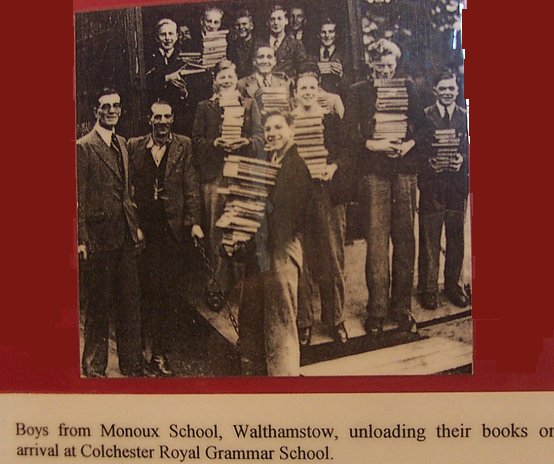 On 17 November, the school was moved to Colchester. This time the evacuation was by bus. The idea was probably to re-establish the school as a single unit, in one place. No.12 Lexden Road became the "Monoux House" - a place for storage of books, a staff and prefects' room, as well as a room variously used for classes and recreation. From Colchester, 48 miles from Walthamstow, many of the boys were able to cycle or take the train home for weekends and at holidays. It must not be forgotten also that many parents had recalled their sons, largely because of the lack of air raids in the early months of the war. In Colchester, the Monoux School worked in the Royal Grammar School, in various of the town's schools and in the Technical College. Success in examinations was maintained after a year of evacuation, though, of course in lower numbers. In Colchester the boys found themselves in relatively familiar surroundings and life seems to have presented a less rustic and makeshift appearance than it did in Bedfordshire.

However, the School moved yet again, this time by train from Colchester on 2 June 1940, and arrived eventually in Bromyard, in Herefordshire. The move was occasioned, one suspects, by the fears of invasion, for a decision had been taken by the Government during the late Spring to make Colchester itself an evacuable area, and the date set for this was 1 July 1940. In Colchester, the School was billeted almost on the east coast. In Bromyard, it was in the rural Marches of Wales.